2018 The Year That Big Business Will Adopt Augmented Reality

Virtual reality has gamers and geeks around the world itching for more immersive digital experiences, be they video games, 360 videos or virtual tours. It’s augmented reality (or AR) however, that appears to be transforming the way in which many of the biggest businesses on the planet operate.

While virtual reality headsets are transporting users to a whole new world, augmented reality keeps things slightly more grounded – which is perhaps one of the reasons smart glasses and headsets like the Microsoft Hololens are being widely adopted by industry giants looking to find competitive advantages and cost savings through emerging technology.

Early apps for the Hololens demonstrated why AR would quickly become incredibly useful for all types of businesses. The apps showed just how users could benefit from being able to access immersive digital experiences whilst still operating in the real environment. This is a crucial distinction. While VR could place you in a virtual world with incredible realism, AR could add information to the real world itself.

But what are the real-world applications for AR in business?

It’s in the nature of big businesses to seek out value and efficiency, and the safety of staff has to be right up there with the biggest priorities. That’s one of the reasons that augmented reality is going to transform all kinds of businesses where operatives are working out in the field, perhaps in dangerous environments or using mechanical equipment that can be dangerous.

Imagine being able to train large teams of staff to use heavy machinery in an augmented reality environment. Perhaps trainees could walk around an empty room, training on a virtual machine before they are qualified to safely use the real thing. When using real machinery, an AR system could overlay warnings to remind staff members not to put their fingers in the cogs, which wires are live, or to turn off the machine when they’re done. A key concept is the freedom to fail, and see the consequences, something we cannot do in real life.

Hololens systems are already being widely used by Thyssenkrupp, a German elevator manufacturer, to give their 24,000 engineers a realistic preview of elevators that they will be working on as well as real time, hands free access to technical information when they’re onsite. 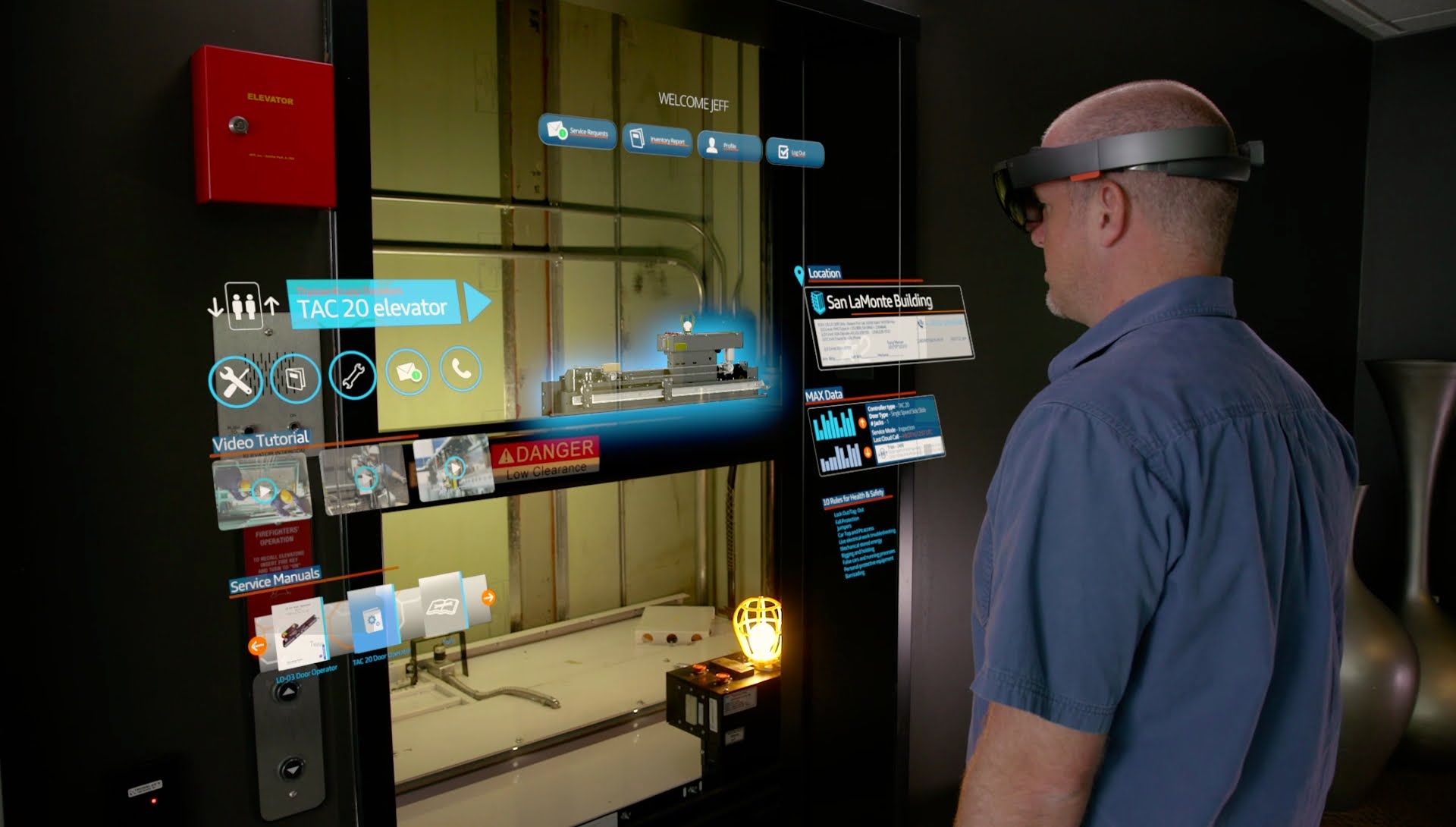 The potential uses of augmented reality for big business don’t just involve helping staff and technicians on training their operations.

Porsche recently developed an AR app for Hololens that allows prospective buyers to conjure up a 3D hologram of their chosen Porsche model, speccing it out with optional extras and customising it’s look by selecting paint jobs etc. Of course, this “build your dream Porsche” app may not be as effective at selling cars as face-to-face sales at the dealership, but it does help to bridge the gap between a customer casually flicking through the website and them showing up at a dealership to see the object of their desires in the flesh. Plus who knows, one day in the not-so-distant future, a trained sales rep may be able to remotely join the user in their augmented reality environment and pitch them the sports car in the comfort of the customer’s own home. 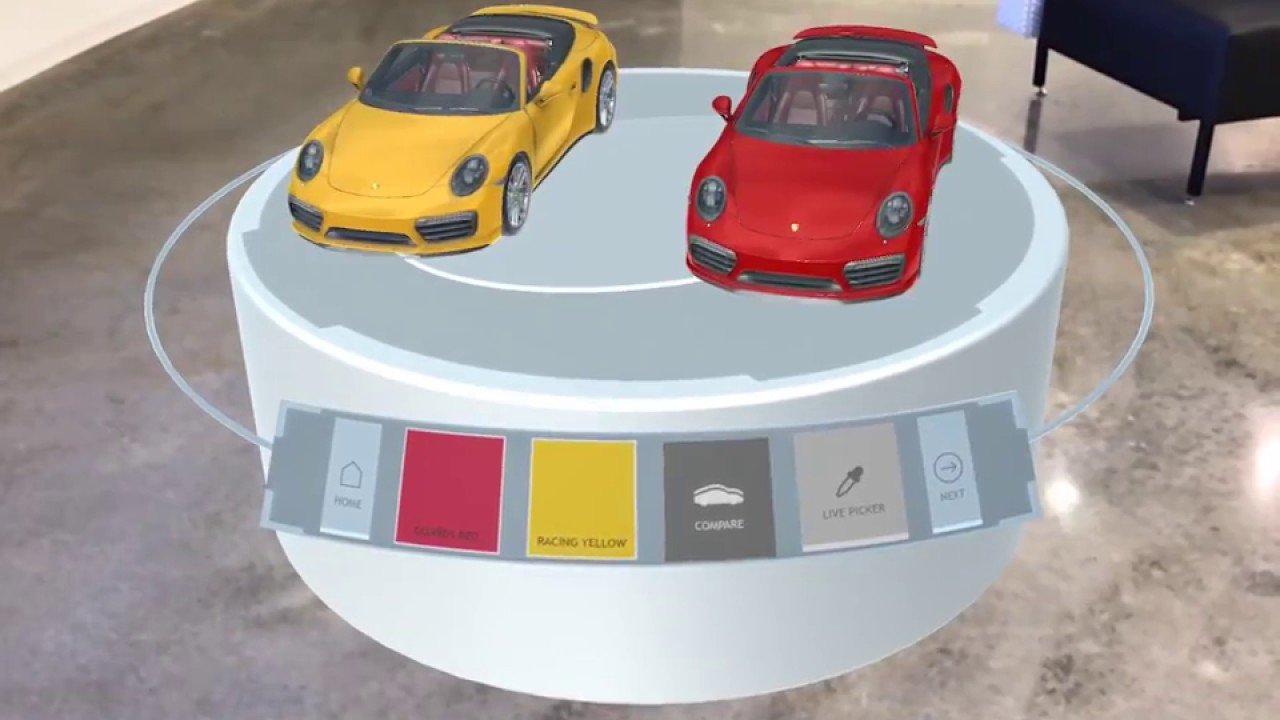 Now Porsche’s developers are working on a version for Apple’s ARKit, meaning the experience will be available on iPhone and iPads, and eventually even Apple’s own AR smart glasses, slated for 2020.

The German automotive giant is also using AR technology in servicing their vehicles. This year, Porsche are beginning to roll out a new system they call Tech Look Live to dealerships across the US. A staff member at any remote dealership will be able to don a pair of smart glasses which relays images to Porsche’s service center in Atlanta, Georgia. The staff in Georgia can capture screenshots of what the dealership staff are seeing, such as a damaged part or issue beneath the hood. The service center technician can then send technical information, instructions or knowledge base articles back to the staff member who will be able to read them in their field of view on the smart glasses.

Trialing this technology at eight dealerships, Porsche found that they were able to reduce the amount of time that issues took to solve by 40%, a number that’s sure to improve as the potential uses of the technology are further explored and better understood.ar

Training is an area of business that’s also likely to be revolutionised by augmented reality. Take innovative technology firm BrainShark, who create software to help with sales training. They are utilizing the Hololens to enter their users into a virtual sales experience where they can run role plays of high-pressure sales negotiations and get coaching on their performance without having to risk real client relationships in order to gain experience.

AR in Industry Is Here to Stay

So, from consumer-facing sales apps to training sims for internal use, the Microsoft Hololens and AR in general are already making waves in the world of big business. Offering both high-value functionality as well as huge cost savings, 2018 is sure to see corporations falling over themselves to take advantage of the opportunities presented by augmented reality.