Getting Fully Immersed at the “Star Wars: Secrets of The Empire” VR experience

VR-based entertainment is most certainly creeping it’s way into the homes of gamers and enthusiasts, but it’s Stratford’s Westfield shopping center where the wider public are getting their first taste of the fun that can be had while wearing a VR headset.

“Star Wars: Secrets of The Empire” is a VR experience being hosted by an entertainment business which hosts VR experiences similarly to how cinemas show movies.

But what is their debut VR experience like to play, and with the price of VR headsets decreasing, what can the business do to stand apart from home entertainment?

Part of what makes Star Wars: Secrets of the Empire exciting is the use of cutting-edge VR technology. In a home VR setup, you usually have a wired headset connected to your computer, as well as a pair of wireless controllers for extra input. That tethered headset, however, places a limitation on the experience because you can’t move around beyond the reach of that pesky HDMI cable.

The Star Wars VR experience manages to overcome this by connecting the headset to a lightweight computer that you wear as a backpack. The backpack doubles as a haptic vest which vibrates in different spots to give you a visceral warning that you’re being shot or attacked in the game. The headset is connected to the backpack and the backpack communicates with a central system wirelessly, which gives players the ability to roam freely throughout the game world without worrying about pulling the computer off the desk. It might sound complex, but the result is a completely seamless experience in which you’re free to walk around the map.

An extra benefit of this backpack, vest and headset combo is it makes you feel like a real Stormtrooper!

The premise of the VR experience is simple. You’re member of the Rebel Alliance, but have to don a disguise (a Stormtrooper’s armor) in order to avoid detection and discover the secret item that the Galactic Empire has hidden on their spaceship.

As the adventure progresses, you find yourself in shootouts with enemy forces and even battling against one of the biggest names in the Star Wars universe…

There are a bunch of fun VR moments during the Star Wars themed experience. Without giving too much away, there are times in the game where you might reach out for an object or go to take a seat and find that it is in fact present in the real world as well as the game world. You can actually pick up items in the game with your own hands. This is one of the neatest tricks of the experience because with a normal VR game, trying to sit on a virtual bench will see you dumped unceremoniously onto the floor. Smells and sensations are used to great effect for the experience and add to the fun, surprise and immersion. 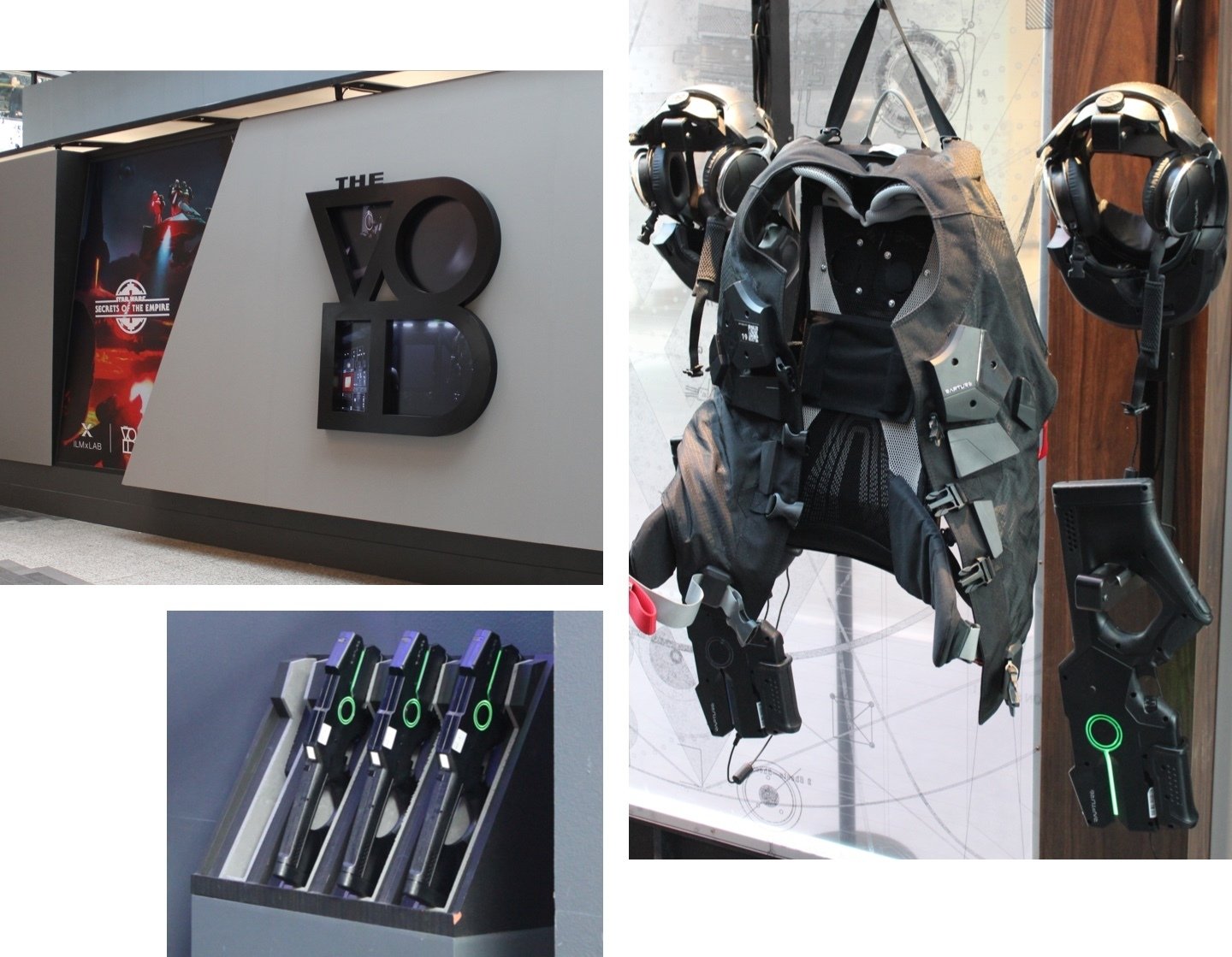 This is achieved by exactly matching the game world map with the real world venue’s map so that items appears in the game at the exact correct location. It sounds simple, but making sure that the real world and game world align exactly must have involved some head scratching and take this VR experience beyond what can be achieved with even the fanciest home setups.

Although the level of immersion the creators have managed to achieve with this Star Wars experience is impressive, a few would-be Rebels had the same criticism when we left – the experience was too short!

The experience lasted around 30 minutes including getting suited up, briefed and being pitched photos and merch after the experience. Actual play time was around 15 minutes which really does feel like a quick tutorial to anyone who’s used to playing mainstream video games for hours on end.

Tickets cost £35 per player, which adds up for a family of four – especially considering the shopping center has a cinema which will keep everyone entertained for at least a couple of hours, for less money.

Star Wars fans are one of the most passionate groups in all of geekdom, so I’m sure the VR business won’t have a problem getting them to queue up for the chance to don the headset. That said, it will be interesting to see how their future experiences stack up and if the business can continue to rethink and revamp their experiences to encourage repeat patronage.

Basing the VR experiences on established movie franchises seems like a wise choice that will gets fans interested. With a “Ghostbusters” themed experience available from the company in the US, perhaps we can look forward to it landing in Stratford soon.