New research undertaken at the University of Nottingham has shown how virtual reality (VR) could be used to improve employee safety by taking an immersive approach to common health and safety training tasks such as fire evacuation drills.

The Human Factors Research Group at the East Midlands institution has trialled an innovative system that tests not just visual responses but reactions to other sensory cues as well. Two intensive training scenarios – an emergency fire evacuation and a fuel leak – were made all the more lifelike by stimulating the participant’s perception of temperature, smell and hearing, as well as sight.
The aim of the project was to produce evidence-based guidance for the development and use of virtual environments that can enable engaging and effective training using cost-effective and accessible solutions. 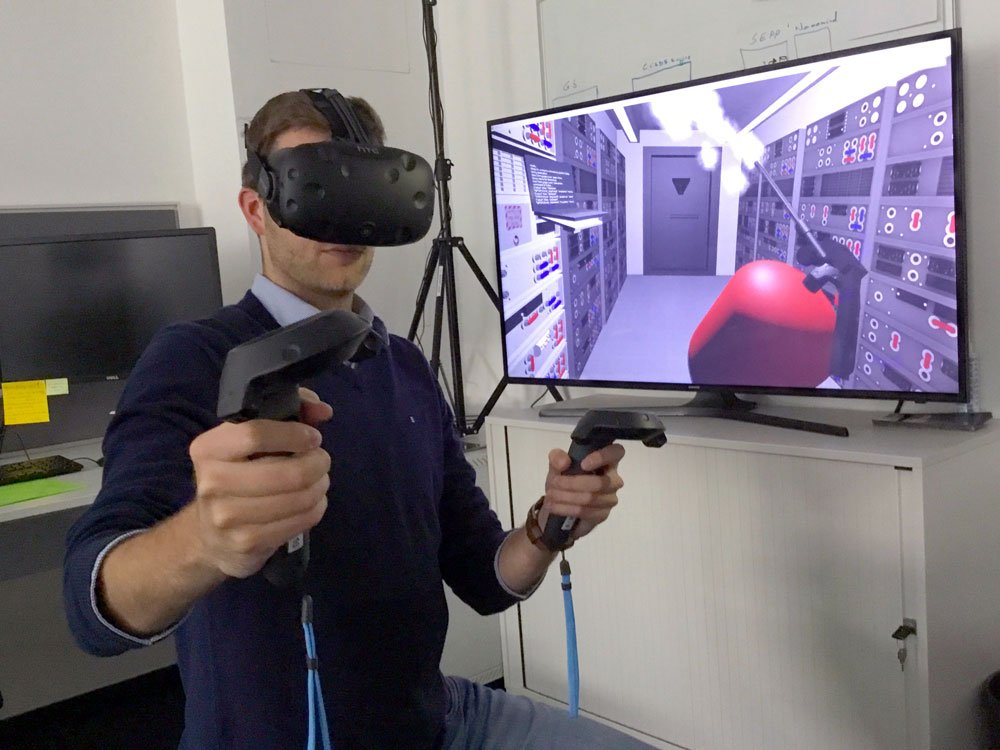 Most professionals have been through some form of fire safety training, but usually in the form of an in-person or video presentation that can only go so far in making the trainee fully aware of the dangers they’d be facing if it happened for real. Providers have long been looking for new methods of motivating and engaging people taking part in a course. ensuring they remain entirely risk-free. In recent years, immersive technology has emerged as one of the most effective ways of preparing for a scenario that would be too dangerous to reproduce any other way.

In one example from the Nottingham study, a virtual office fire was created using a combination of a VR headset used to visualise the hazard and a set of heaters and scent diffusers to ‘trick’ the wearer into thinking they can feel the blaze and smell burning. Another group was put in a similar situation; however they were subjected to only audio-visual stimuli.

The researchers on the project, which was funded by the Institution of Occupational Safety and Health (IOSH), found that there were distinct differences in the ways that the two groups dealt with the scenario. Those getting the full multisensory experience went about the task with a greater sense of urgency than the other participants, who reacted more like they were playing a game. The group that was subjected to the heaters and sensors were more likely to avoid the fires, and generally responded closer to how a person would in an actual fire.

Immersive training using virtual reality is also convenient, as the activity can take place either at or close to the workplace – no more asking employees to travel long distances to a specialist location – and participants are more likely to agree to further training too.

Is VR more effective than PowerPoint?

Another experiment was carried out to determine how the effects of VR training compared to the more traditional approach of PowerPoint presentations. Two groups of participants – one using VR, the other PowerPoint – were asked to complete questionnaires which tested their knowledge of one of two subjects before and after they were given training. A week later they were given another questionnaire to see how much information they had retained in that time.

Although the results showed that the PowerPoint group performed better on the first test that immediately followed the training, there was a greater decline in their scores when they took the second test. Those using VR appeared to retain the information for longer and also displayed higher levels of engagement, showed better attitudes towards occupational health and safety and more willingness to take part in further training.

The research suggests that learning in a virtual environment can enhance cognitive engagement, allowing the user to build better mental models that can boost recall. Another conclusion that can be drawn is that testing a trainee’s knowledge immediately following a session might not be the best way of evaluating the extent of what they have learned in the long term, at least in scenarios like the one set out in this particular study.

According to Mary Ogungbeje, Research Manager at IOSH, the study “gives us a taste of what’s to come” in the field of training, with virtual and smart learning on the rise and technology continuing to advance rapidly and become more affordable.

This is just one piece of evidence outlining the benefits of virtual reality and health training. For more information and to find out what we offer through our own platform, visit our dedicate page here.