Able to deliver Hololens preloaded with your content anywhere in the world and we can normally deliver next day to anywhere in Europe if required. 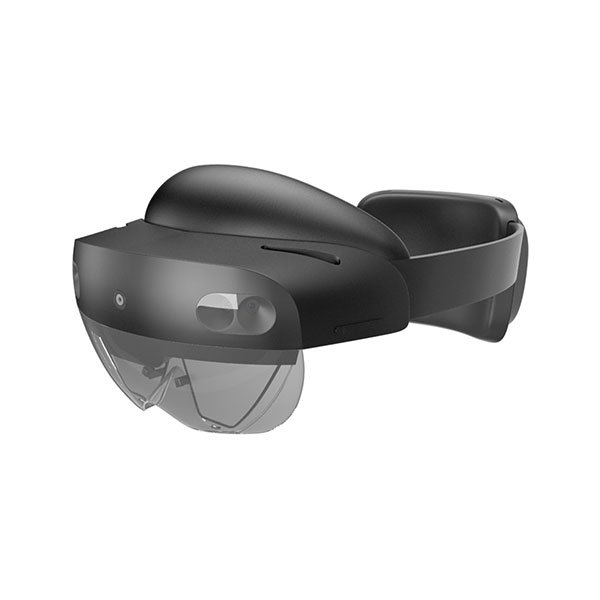 Off the bat it is crucial to set in place who this new headset from Microsoft is for, unfortunately its far from suitable for those wanting a living room AR experience. However if you want a very helpful tool for the workplace to increase productivity and a new and interactive way to train in fields perceived dangerous or otherwise.

While the HoloLens 2 looks strikingly similar to the HoloLens, most of the design tweaks made have been saved for what the eyes can’t see. The headset, while compact, feels extremely well built, with matte black metal encasing the electronics and an adjustable band that fits around the head of the user, very smart. When putting the headset on you start to be able to tell the difference between its predecessor, for sure the weight distribution of the headset, with the original weighing in at 579g against the very slightly lighter 566g of the new. However whereas the first iteration had the bulk of the weight at the front of the headset, many found it to be uncomfortable during long sessions. The new version has made valiant efforts to correct this by moving the weight and distributing more evenly across the band; for example, having the battery pack at the back of the head, reducing strain on the neck. This makes it much more inviting for work place use as it can now be used for a much longer period, as compared to the recommended 1-2 hours. Overall it has a much better feel and extra comfort can never be a bad thing. The HoloLens 2 display comprises a 2K (2048 1536) resolution in a 3:2 format versus the 720p resolution at 16:9 fitted into the original. However the holographic density remains the same.

As far as using the headset goes, it’s a very easy and streamlined experience. The interactions with the holograms produced are interesting and satisfying. The integrated eye tracking technology is also a neat feature, with the programs allowing room to learn from your reading patterns and adjust accordingly. The field of view that these holograms can be seen has also been increased dramatically, this much improves the immersion factor for the headset. As well as this the pre-determined gestures that had to be pre learned before using the device have been scrapped for being way too confusing and inconsistent to be useful at a moment’s notice; these have instead been replaced with much more intuitive gestures more akin to day to day moments, some of these include pinches, drags and pulls. While this is a massive improvement in the tech, the restrictions put in place are still clear to see.

The hardware of the has also seen some much welcomed changes. With an upgrade from Micro-USB to USB-C as well as an improvement to the battery life compared to the 2-3 hours offered by the original HoloLens, although official figures are not yet available. As well as this the RAM has been doubled from 2GB to 4GB, and also sporting a 64GB storage bay and Bluetooth 5.0, its well equipped for the modern market. The quality of the cameras have also been improved, from a measly 2MP to 8MP. Many of the sensors have had minor but welcomed improvements.

Overall I can safely say that the HoloLens 2 is leaps and bound above the original, and for sure the best MR headset on the market. For enterprise users it holds almost limitless use with the possibilities for applications in a variety of workplaces. It will be very interesting to see how Microsoft and partners are able to utilise this technology.

The Microsoft Hololens is available to hire from Virtual Reality Experiences, when hiring the equipment can be hand delivered by a member of our well trained and friendly team and will arrive with all of the necessary equipment and software to make your use as easy as possible. As well as any spare equipment you may need. VRE offer a package that is easy and efficient for both private and enterprise use. Please give us a call to discuss the hire of this headset at your pleasure.