If you asked someone to name an industry that uses innovative emerging technologies to improve processes and increase efficiency, construction might not be the first industry that comes to mind. The sheer scale of many projects, tight regulation and the less than glamorous image of the industry just doesn’t scream “high-tech”.

However, it is indeed the construction industry that’s already beginning to take advantage of the benefits of augmented and virtual reality technology, with global market leaders getting on-board and critical mass fast approaching.

Here, we explore how augmented and virtual reality are being used in construction, and the benefits that businesses are enjoying thanks to the new tech.

There are a huge range of use cases for both augmented and virtual reality in the construction industry – far too many to list off here. However, one of the most practical uses currently being explored is in using augmented reality to reducing design coordination errors.

For example, augmented reality headsets can be worn by construction workers and can tell them if they are about to make an error – routing plumbing through a space that was intended for wiring, for example.

The AR technology identifies that an error is about to be made by comparing the plans for the building to the real world that it sees via it’s sensors. It then superimposes addition information in front of the construction worker to guide them and warn them before any errors are made. Think of this application like virtual Post-It notes being generated by artificial intelligence and put in front of construction workers at the relevant moment. As a crude example, your AR headset may warn you, “No, don’t install this plug socket until the wiring has been completed”.

By stopping these (potentially costly) human errors before they happen, augmented reality can reduce change orders and the duplication of effort, ultimately bringing down the cost of construction and allowing projects to be completed more quickly, which benefits everyone involved.

Most importantly, by reducing errors, AR creates a safer work environment for the people who are building our homes and cities.

Microsoft’s Hololens headset impressed augmented reality enthusiasts with games that superimposed great big holes onto their living room walls, allowing users to see another world through the portal. In the construction industry, the same trick is being used for more productive means.

The construction worker of tomorrow will be able to see a virtual depiction of the next room, before it’s even been constructed, using augmented reality. This means that as they’re fitting components in one area, they can see how they relate to components in other areas of the building. For example, a worker installing some plumbing will be able to see the blueprint data for where each sink and bathroom in the house are located and how they all connect together.

By allowing construction teams to better visualise the project, miscalculations can be avoided and the tasks themselves are made easier. 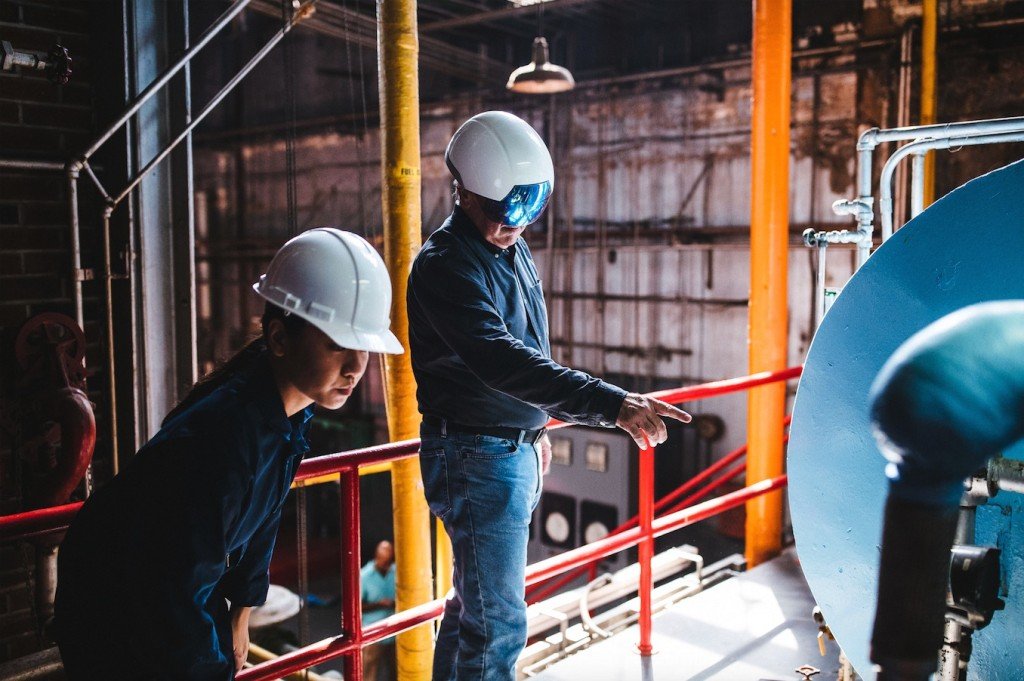 Augmented reality can also be used in conjunction with other emerging technologies to support construction projects.

Currently, laser-based systems are being used to capture data about the physical construction site, data which can be cross checked with construction plans to confirm that everything is in order before a project is completed, as well as leaving clients and maintenance teams with a 100% accurate floor plan of every square inch.

Recent advances in robotics and artificial intelligence all add to the promise of a future where construction workers spend more time operating technology, while the robots do more of the heavy lifting. AR-equipped humans and AI-powered robots are set to radically transform construction over the coming decades and it will be interesting to see how these technologies evolve together, bridging the gap between man and machine.

AR in Construction Is Here To Stay

All of these benefits of augmented reality are set to completely transform the way we construct buildings. We’re not the only ones who think so, the United Kingdom government innovation agency, Innovate UK, have already invested £1 million in the development of augmented reality for the construction industry.
City skylines continue to rise upward, almost as rapidly they are expanding outward. Thanks to cutting-edge AR and VR technology, citizens can look forward to new homes and commercial properties being delivered more safely, quickly and cheaply.

Suffice to say, augmented reality for the construction industry is here to stay.

Contact VRE today to discuss how the power of AR/VR technology could benefit your business.