For many years, the name HP has been far from synonymous with the gaming community, however 2020 may be the year for this to change. The company have decided to develop a new and powerful VR headset that is set to take on the industry heavyweights, and looking at the specification that are on offer, it seems to be a winning battle.

When comparing the new HP Reverb G2 to the more established headsets on the market, such as the Oculus Rift-S or the Vive Cosmos, it is easy to see why this is such an exciting concept. The Reverb boasts a much higher resolution than its competitors, with 2160 x 2160 px per eye as compared to the 1440 × 1280 px per eye for the Rift-S and 1,440 × 1,700 per-eye for the Cosmos. This is a huge increase on the trade standards and will give the consumer the opportunity to experience the best VR has to offer in a resolution that does it justice. As well as this, the lenses have also been updated in accordance with modern technology, with Valve lending some assistance in order to achieve a high level of clarity for all of the 114 degrees of FoV on offer. While 114 degrees is not an improvement on the Rift-S nor the Cosmos, the increased pixel density of the headset will be sure to convey the highest quality of visuals for the style of headset, maybe trumped only by the Pimax series of headsets. 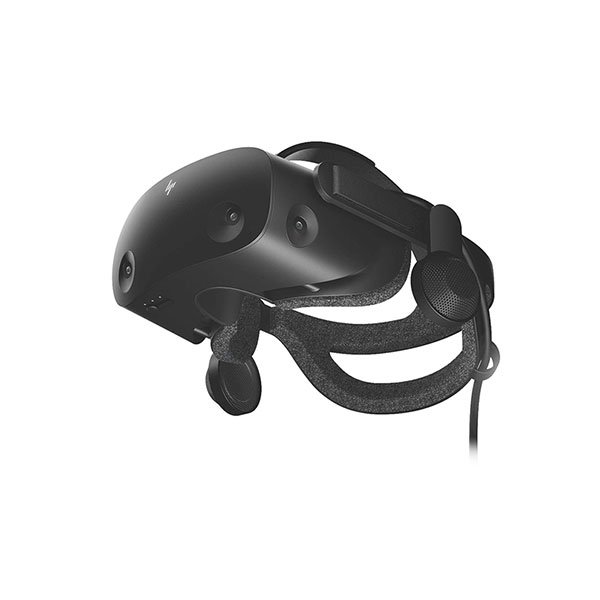 Of course, no advancement would be complete without some variations to the overall design of the headset itself, which the Reverb G2 has plenty over their previous outing, the Reverb G1. HP have opted to follow the industry standard looping head strap, softer padding around the eyes and head as well as the inclusion of a manual IPD system to allow changes to the distance of the focal point inside the headset. I personally much prefer a manual slider as an automatic or digital version can sometimes lead to blurry visuals, especially when switching between users, a physical slider allows all users, experienced or otherwise, to make sure they are getting the best experience possible. Not only is this great for personal use but also in larger groups for gatherings or in a workplace environment. The device can be easily tightened or loosened via the Velcro straps on the sides of the headset, this is an outlier as compared to the current flagship models of the Reverbs main competitors, who seem to be moving towards the rear tightening wheel instead of Velcro. This is, however, not an issue as it can be seen as one less part to potentially break under stress.
Influence from Valve can also be seen in the design for the headphones on the Reverb G2, as their over the hear style headphones have also been added onto the device. These headphones opt to hover just above the ear as opposed to sitting on top. HP have claimed that the headphones inside their new headset uses the same drivers and amps as the Index from Valve, which is widely accepted as the best in regards to built in VR audio. The Reverb G2 will also ship with a 6m long tether wire connected to a PC via Display Port and USB-C, or a power brick option is also included in the box.

The controllers for the Reverb G2 have also seen a massive overhaul over previous Windows Mixed Reality devices. From previous iterations containing trackpads and application buttons, the new controllers seem to more closely resemble that of the Oculus series of handsets. With grip and front triggers, an analogue stick and face buttons to directly compete with those headsets solely designed with gaming in mind. As well as working with the Reverb G2, the controllers will also be compatible with previous Windows Mixed Reality Devices and plan to sell them separately for this purpose at an undisclosed time in the future. These controllers will be a big step forward for the success of the Reverb G2, a comfortable and ergonomic controller can make or break the VR experience, with this design set to only enhance the usage of the system.

When using the device there is no need to set up base stations or sensors due to the inside out tracking system in place. There are 4 cameras on the outside of the headset that will track movement of the head as well as the controllers.

To get the most out of the upped resolution of the Reverb G2 you will need to have a powerful PC in order to experience it in its fullest. It would be wise to invest in the best system available to ensure a smooth and beautiful experience.

Consuming content on the Reverb G2 could not be easier, the partnership with Valve also allowing for Steam VR to be used with the headset, meaning all your favourite Steam games to be available for the system. Whether that be fan favourites like Beat Sabre, Half-Life Alyx or Superhot VR.

However the Reverb G2 currently has a massive ace up with proverbial sleeve, with a partnership being unveiled with the developers of Microsoft Flight Simulator to announce that the HP Reverb G2 will be the only VR headset with VR support for the game upon launch, with support for other headsets announced but no dates confirmed. This would not only be the first way to play Flight Simulator in VR, but also arguably the best looking.

Overall this headset is lined up to be the best we have seen thus far in terms of accessibility and performance in its category, it is also very moderately priced for the specifications on offer, at only $599. While more expensive that the Rift-S for example, its resolution is almost doubled, while not doubling the price. With a thoughtful and tested design for both the headset and controllers, it is sure to be the next big contender in the market and will leave the established frontrunners with something to seriously think about for future creations.