The Pico G2 4k is a new, standalone VR headset from Chinese company Pico, boasting impressive 4K screen resolutions in a lightweight package. This 3DoF headset features a 4K display that is capable of playing up to 12K 360 video with the Visbit VR player, as well as offering other third-party viewing applications on its app store, all of which from my usage work just as well as the native player.

However, the aimed demographic for this headset is completely different to that of the Oculus line of headsets, as well as the offerings of HTC as well. This headset is set mainly for the corporate market; and in some ways this is evident with the setup of the operating system. As well as being easy to set up and use, the streamlined nature leans into the notion that this system.

While using other standalone headsets such as the Oculus Quest for long periods of time, I often find it to be quite uncomfortable in the neck due to the front heavy nature of the device, with the battery being the main source of weight in these headsets, having them at the front leads to having to counter that by leaning the head back; after long periods of wear this leads to massive neck strain. However, in the Pico G2 4K as well as the G2 model, the battery is located at the back strap of the headset. This nicely balances the headset, leaving it extremely comfortable to wear, especially during long sessions. Similarly, comfortable are the foam eye supports, which sit nicely over the face without leakage; great for immersion. From a business standpoint this can’t be topped and is high on the priority list for many companies, the last thing you want to do is cause pain to any clients using the device. This is one reason why many companies are steering away from investing in the Oculus Quest and instead opting for the GO. I would now argue that the Pico G2 4K is a more than worthy competitor for the Facebook owned brand and proves that it can stand on its own merits. 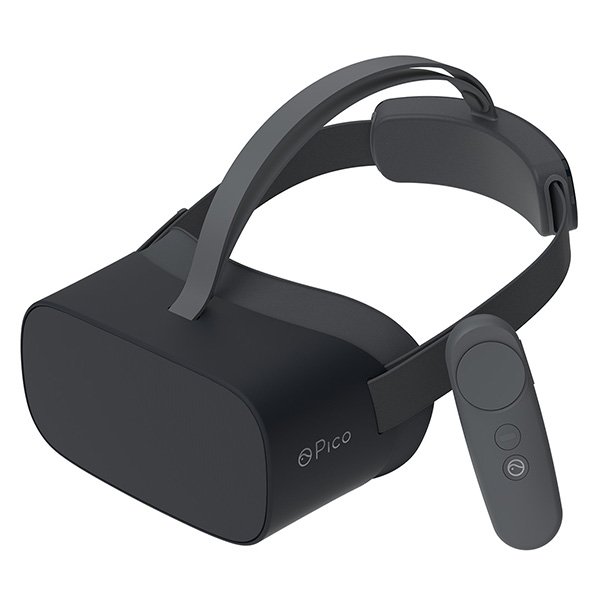 The controller is ergonomic and fits nicely in the hand. With volume controls on both the headset and the controller, the sound level is easily adjusted. One curious design feature of the headset is that the stereo speakers integrated in the headset do not face towards the ears like in the Oculus brand of headsets, but instead on the bottom, so for pinpoint sound I would highly recommend pairing the headset with some headphones (Bluetooth or wired) for a true stereo experience. The controller handsets are also optional as the headset has a pointer feature built in, another great aspect for business use as some clientele may have trouble with use of the handset, as simple as it may be. It has 2 buttons, a trigger at the front and a capacitive touch pad on the top; which is the perfect amount for the presumed user base. There is no need for more, or for less, its small size of course limits how much you can put om but is ample. Controller tracking is good and in my extensive use did not lose the controller within the headset or lose connection between the two.

The 4K screens inside the headset are absolutely beautiful to look through, they show the true potential of 360-degree VR. As compared to the Oculus Go they are much crisper, allowing the true detail of the images and video to shine through. I did not encounter any eye strain, even after watching a movie or two in the virtual cinema; nor though my tests of the 3d V video either.

Overall, for purpose, I highly recommend the Pico G2 4K, and also brother little brother (without the 4K screens, but otherwise virtually identical) the Pico G2. However the 4K version stands head and shoulders above both the 4K, and its competitors in the same weight class.