One of the criticisms you often hear about VR is that it can feel like an isolating experience where you’re thrown into a virtual world that separates you from the real world and its inhabitants.

But it doesn’t have to be that way. In fact, there are plenty of games out there that have been designed specifically to bring people together using VR, rather than force them apart.

This has led to VR evolving from an experience that can only be enjoyed solo to a genuine option for team building experiences, and it’s growing steadily. The idea of team building can provoke groans of despair from employees dreading the prospect of paintballing, crazy golf or karaoke, but with VR now gaining traction in this space, a new option has emerged that really does offer something for everyone.

Here, we pick out five of the best experiences for those looking to try out some tech-focused collaboration.

Problem solving is an important skill that almost all professionals must possess to some extent, but finding a way to nurture this ability with a group of employees and do this in a fun and effective way is not always easy. Fortunately, that’s just what this VR experience was designed for. 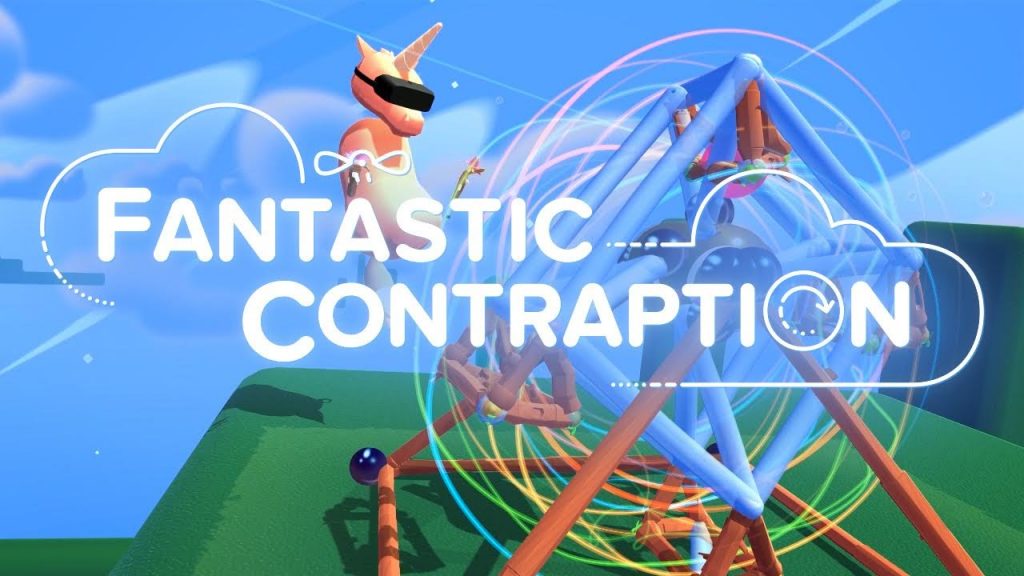 In ‘Fantastic Contraption’, participants are tasked with completing a series of challenges using a set of wacky, colourful tools that enable a rich plethora of ways for each objective to be completed.

While users are sure to love its quirky, surreal game world, unique charm and intuitiveness, it also teaches team members that there is often more than one solution to a problem. They’re sure to enjoy sharing all of their individual ideas, demonstrating their critical thinking skills and helping with each other’s creations too.

Keep Talking and Nobody Explodes

Here we have another problem solver, but this game brings a very different approach to it. Available on more than ten platforms, ‘Keep Talking and Nobody Explodes’ is literally impossible without teamwork, as it involves putting the VR-equipped player in a room with a virtual bomb, which can only be defused using information that the other people in the real world have access to. 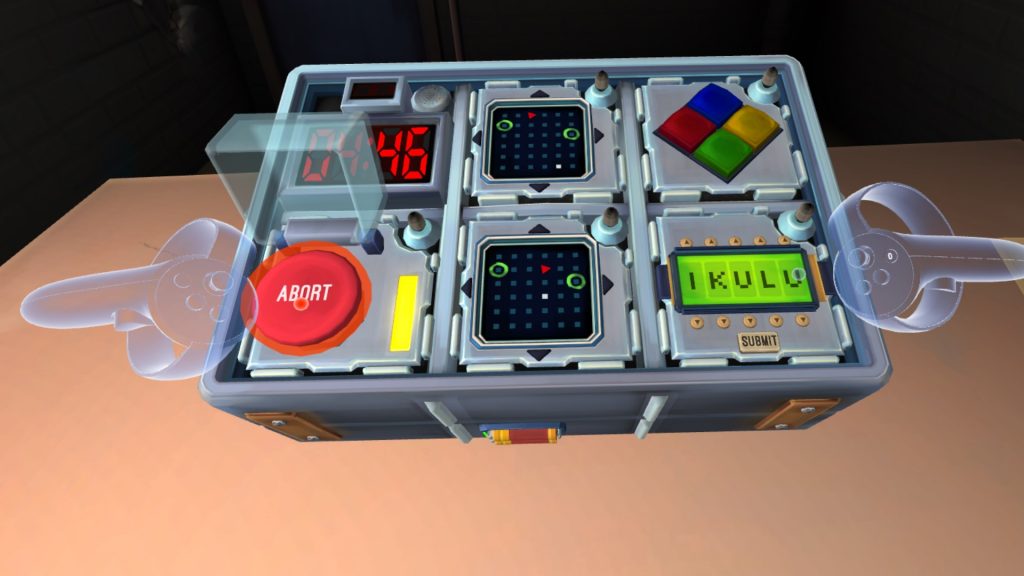 The player is tasked with describing the bomb – only they can see it – while his/her teammates must decipher the info and feed it back to the player as clear instructions – all in a very limited timeframe.

This results in a frantic but fun exercise that forces participants to come up with quick strategies, placing them in the sort of high-pressure situation that brings out individuals’ true collaborative qualities – or lack thereof.

This game offers a similar experience, with a single person interacting with a VR environment helped by others receiving additional information through the TV, except this time it’s for two players. 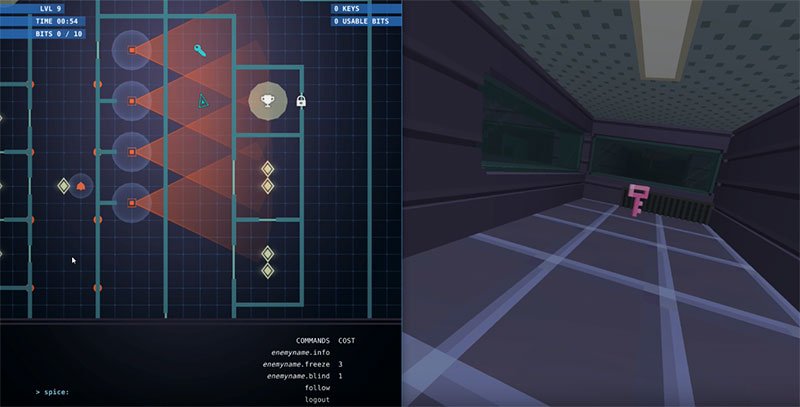 In stealth coop title Black Hat Cooperative, the headset wearer is required to sneak their way around a series of rooms to collect treasure without being spotted by the patrolling robots. Their view of the world is very basic, limited and constrained, whereas the other player can see a whole map of the area, including where all the enemies and collectables are.

The person in VR therefore has to rely on clear, timely instructions from their teammate to ensure they can escape each level without getting caught, with all the loot objectives in their possession.

This one requires more of a strategy, with raw speed less of an essential element, while fans of retro games will appreciate it’s stripped down approach that appears to hark back to the classic early ‘90s era.

So far all of our examples have been games where there’s only one headset, with the rest of the team contributing from outside the virtual world.

But in Star Trek: Bridge Crew, all four participants are immersed in VR, which is great for groups who don’t/can’t meet up in person regularly or who are based vast distances away from each other – a growing trend across businesses of all sizes. 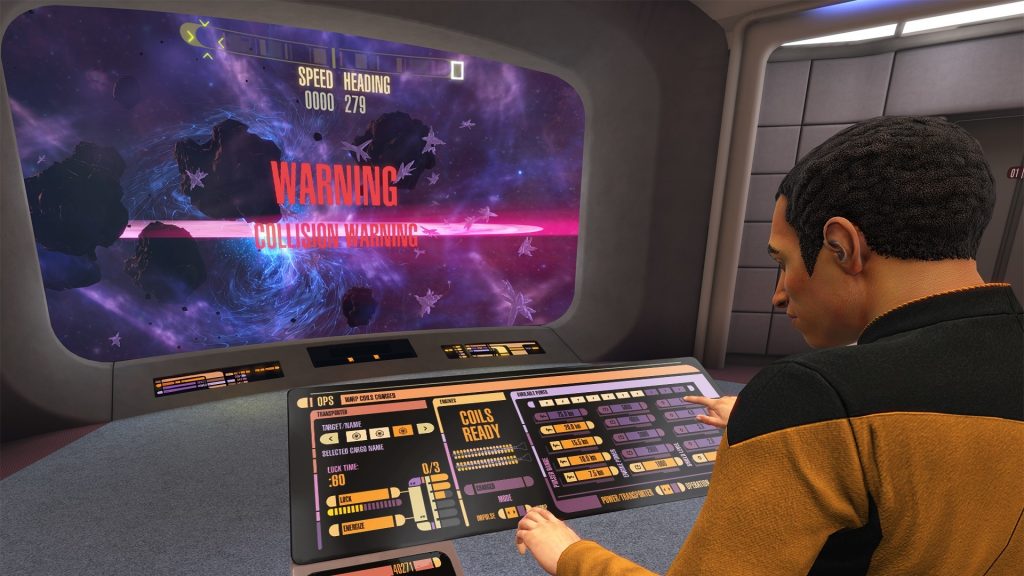 Once set up, the players will find themselves on the bridge of a Federation starship, where they must each take up one of four distinct roles: Helm, Weapons, Engineering and Captain. The crew can then boldly go about tackling a variety of different missions, which can only be successfully completed if everyone works together as a team.

Even non-fans of Star Trek, sci-fi or anything geeky will enjoy finding out what it’s like to serve as an officer on board the USS Aegis – made all the more convincing by the game’s use of high-quality hand tracking, full body avatars and real-time lip sync.

And now for something a bit different, as this isn’t really a VR game designed specifically for team building at all.

In this game, players are given the challenge of walking across a narrow balanced precariously at the top of a soaring skyscraper. Even those who don’t suffer from vertigo will find their pulse racing when immersed within one of the astonishingly realistic simulations that this title offers up. Hilarious reactions are almost guaranteed. 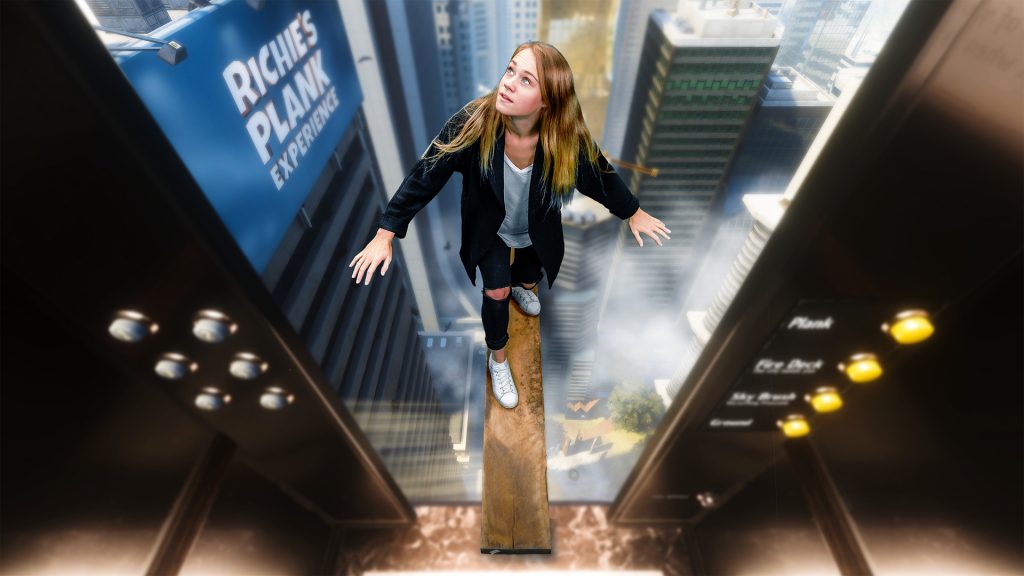 So why is this ideal for team building? Well, some groups will find that they bond best when making a bit of lighthearted fun of each other, and there’s plenty of opportunity for that here. On the other hand, it may elicit cheers of encouragement instead as you tiptoe and wobble your way across, unless your colleagues are particularly mean that is.

With VR only just starting to take off a genuine challenger to the more obvious team building activities out there, there’s surely a lot more to come in the near future as awareness spreads among the general public that this is available.