The Ringelmann Effect, also known as social loafing, was named after Maximilien Ringelmann, a French agricultural engineer born in the 1860’s (Kravitz & Martin, 1986). When examining the efficiency of groups at completing basic agricultural tasks, Ringelmann noted that as group size increased, the performance per individual decreased (Kravitz & Martin, 1986). In his rudimentary study, Ringelmann examined participants performance in a rope-pulling task by measuring each individual’s maximum rope-pulling power in isolation, before comparing their rope-pulling power in groups (Ingham, Levinger, Graves, & Peckham, 1974). He discovered that when individuals worked in groups, their combined actual performance fell short of their combined potential performance, in a largely linear effect, as shown by the graph below. 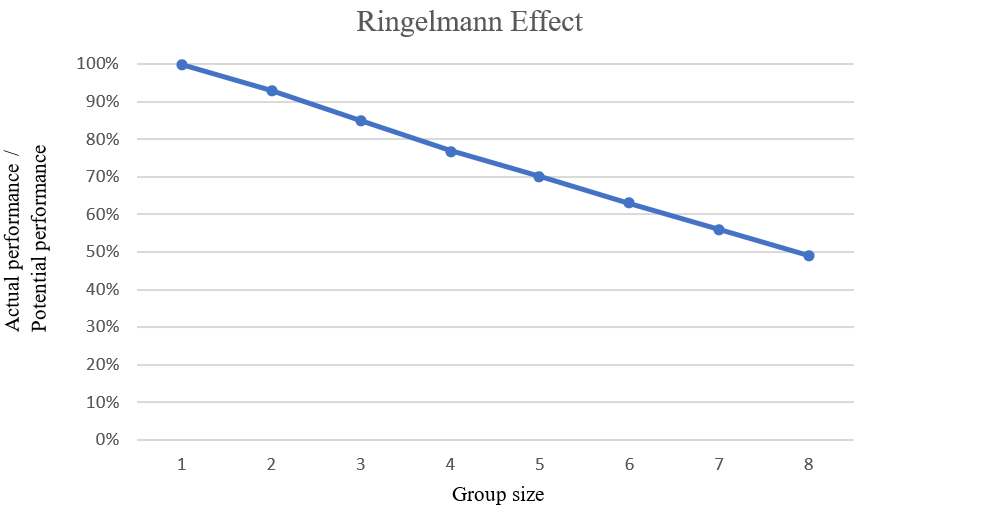 While his research raised the interesting suggestion that when assigned to groups we achieve less than the sum of our parts, it was not until the 1970’s, when Alan Ingham and colleagues (1974) reopened Ringelmann’s findings that they gained significant traction in the world of psychology. Subsequent studies confirmed that the Ringelmann Effect occurred in a variety of settings, including both physical (Ingham, Levinger, Graves, & Peckham, 1974) and cognitive (Petty, Harkins, Williams, & Latane, 1977) performance tasks. Scholars aimed to develop reasons for this occurrence, with one explanation suggesting that individual performance is hampered by the constraints of working in a group, with the very nature of group-work making it impossible to synchronise maximal performance across team members in any given task (Kravitz & Martin, 1986). While this can hold true under certain conditions, Ingham and colleagues’ (1974) controlled study highlighted that this could not be the primary reason for individual performance drop-off. Their results suggested that, levels of individual performance drop-off found within groups, can be primarily attributed to a reduction in levels of individual motivation. While this explanation may not come as a surprise to many, particularly when reflecting on your own experiences of working in groups, it is a major dilemma that is faced by managers, team leaders, and coaches on a daily basis. So, what are the specific circumstances that result in motivational drop-off, and how can training in VR help in overcoming these barriers to success?

Group size: When individuals come together in groups, they often fail to achieve their maximum potential for a number of reasons. It is widely agreed that group size is a significant contributing factor behind social loafing (Karau & Williams, 1993; Latane, Williams, & Harkins, 1979) . As group sizes grow, individual performance levels drop (Liden, Wayne, Jaworski, & Bennett, 2004), with high achievers often being the most affected (Simms & Nichols, 2014). It is important when designing training courses or building teams for projects to keep group numbers as low as possible, to allow for each team member to reach their maximum potential.

Identifiability: When groups grow in size, anonymity thrives, as individuals feel less valued and less accountable for their actions (Latane, Williams, & Harkins, 1979). While this occurs to some extent in groups of all sizes, Williams and colleagues (1981) discovered that social loafing disappeared when individuals were under the impression that their individual output was being measured. Participants who worked in groups performed as well as individuals working alone, when under the impression that their individual output was identifiable. When output is not identifiable, individual levels of performance suffer, regardless of whether an individual is working alone or within a team (Williams, Harkin, & Latane, 1981). Training in VR has the ability to remove individual anonymity in a fun and well-designed manner. Performance can be measured at the individual level, as users receive feedback on their task performance. Studies show that measuring performance at the individual level forces unmotivated individuals into action (Chen, Zhang, & Latimer, 2014), giving them a purpose to show off their skills and develop their potential (Reeve, 2014). Digital scoreboards can be used not only to monitor individual performance, but also for goal setting for the overall group by creating a target that is observable, measurable, and designed to be achieved within the allotted VR training session, creating healthy competition within the group (Brown, Tumeo, Larey, & Paulus, 1998). Studies suggest that when groups are enticed with a valued reward for completing a task, social loafing diminishes, as individuals are motivated to do their bit to achieve the prize (Zaccaro, 1984).

Invisibility: Removing anonymity in almost all training settings leads to increased visibility. Increased visibility however does not always result in greater performance. It has been found that in group settings, certain individuals may engage in impression management (Mulvey, Bowes-Sperry, & Klein, 1998), resulting in them failing to give their full effort out of fear of embarrassment. This is particularly true when group members vary in ability and experience (Mulvey, Bowes-Sperry, & Klein, 1998). Visibility, therefore, can at times be a hindrance. VR can remove anonymity while adjusting for layers of invisibility. Studies have shown that virtual environments can improve self-disclosure, particularly in relation to content that the individual may find embarrassing (Barak & Gluk-Ofri, 2007; Hooi & Cho, 2013). In VR, group members do not face the social embarrassment that can occur in face-to-face interactions. “Silly questions” or poor suggestions are not greeted with frowns or glancing looks, rather they can be developed through verbal communication. Studies suggest that when group members make their deficiencies known to the group, other group members will do more to help them reach their potential as well as putting in more effort themselves, thus maximising their own performance (Karau & Williams, 1993).

Invisibility can also help in preventing the phenomenon known as the “Sucker Effect”. This occurs when an individual perceives that other team members are not giving their full effort, and therefore fail to apply maximum effort themselves, preferencing a loss in overall group performance over being the sucker who puts in more effort than others (Schnake, 1991). In person, we can make incorrect inferences about another person’s effort based on non-verbal cues such as body language, posture, or something as innocuous as a yawn. VR can alleviate this issue by removing non-verbal cues in under certain conditions, while allowing the trainer to choose when and where to add them. This ability to control visibility is a key advantage VR has over other forms of technology that is often overlooked.

While invisibility can harness positive outcomes, users must be aware that it can also be harmful, as people may behave with less kindness in virtual environments as a consequence of not seeing the human that they are interacting with (Suler, 2004). Dehumanisation has been cited as a contributing factor of social loafing in technology-heavy workplaces (Alnuaimi, Robert, & Maruping, 2010), as employees can feel that they are cogs in a machine rather than valued human beings. Advances in VR help protect against this, with the majority of applications using either photo-generated or customisable avatars, giving a human touch to each user. Studies examining the interaction of avatars in VR have found that individuals behave in ways largely bounded by socially accepted norms defined by the offline world (Bailenson & Yee, 2008), calming any fears over socially unacceptable behaviour.

Individuality: When individuals are made aware that their contributions within a group are unique, social loafing does not occur as readily as when individuals perceive the contribution of all group members as being the same (Harkins & Petty, 1982). When individuals feel like their individual value is not fully appreciated, they will fail to apply 100% effort to the task. While training courses will always try to promote the value of each individual within a group, designing courses that give individual attention to each person is tricky, as attention to one individual can be viewed as a lack of attention to another (Synnot, 2016). VR training can be designed to facilitate group work while giving each member the impression that they are the primary focus of the virtual trainer. The first-person perspective VR affords to all users places the individual as the primary focus of the experience, heightening feelings of importance and individuality. Feedback through VR can be tailored to the individual in one-on-one settings, while in group settings the immersion that VR affords means users remain active and engaged in their current setting, an issue that plagues offline training.

Fatigue: A final reason cited as a factor of social loafing, is one that can occur even when the individual desires to give their full engagement, and that is fatigue (Hoeksema-van Orden, Gaillard, & & Buunk, 1998). Where offline group training triumphs in interaction and engagement, it cannot prevent individual fatigue. VR offers a blend of group and individual training that can be completed at set-times or during times of personal preference. The ability to offer repeated exposure at minimal extra cost gives it an advantage over other forms of training. VR applications are not susceptible to human fallacies in repetition tasks such as fatigue, bias, or subjectivity, all of which can negatively affect repetition tasks in other modes of training.

While it is difficult to erase social loafing from any work or training group, VR offers a unique experience that is equipped to tackle the contributing factors that lead to social loafing, making it a tool that is brilliant for group work, team-bonding, or organisation training. No longer is VR a tool used only by gamers and tech wizards, it is a technology for the here and now to be harnessed by managers, team leaders, and coaches alike.